ALEX EASTON MLA PAYS TRIBUTE TO EVERYONE FOR MARKING THE PASSING OF QUEEN ELIZABETH OVER THE WEEKEND. 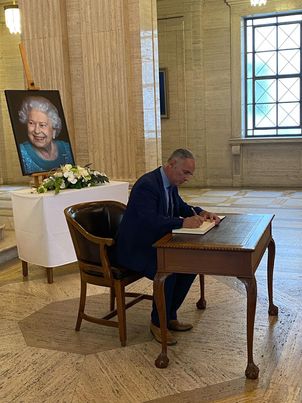 Alex Easton MLA has today praised everyone for taking part and organizing events over the last weekend to remember and mark the passing of Queen Elizabeth the 2nd.

“ I don’t believe I will ever see the likes of this again in my life time, nobody will be able to forget the out pouring of grief at the passing of her majesty Queen Elizabeth, So many events were held over the last few days and I would like to pay tribute to all those involved in their organization but to witness the outpouring of grief and respect for out late Queen was just astounding and mind blowing. The people of North Down never fail to amaze me.

“I was privileged to have attended events around North Down from Millisle, Donaghadee, Groomsport, Bangor Ward Park, different churches and Council was mind blowing. I also had the privilege to have gone to London to pay my respects, which was such a privilege and honour. I will never be able to forget that as long as I live. Thank you to the people of North Down and thank you to our late Queen Elizabeth for all you have done for us as a country and the sacrifice and service you have given for all; we will never see the likes of you again.”